One franchisee is bringing the food of two different worlds to one shopping center in northwest Fresno.

As the up-and-coming Marketplace at El Paseo continues to grow, franchisee Mosa Gazali of Fresno and his partner are bringing Daphne’s Restaurant — a Greek, California fusion restaurant — and Wayback Burger to the developing shopping center at Herndon Avenue and Highway 99.

Gazali anticipates Daphne’s Restaurant opening first. The Mediterranean-focused eatery is planted between Jamba Juice and Judy’s Donuts in 1,800 square feet toward the northern end of the shopping center.

Construction should begin next week to reconfigure the entryway and install the kitchen, fixtures and furniture for the fast casual dine-in and take out restaurant. Gazali hopes construction will only take a month as he says all of the permits have already been secured. 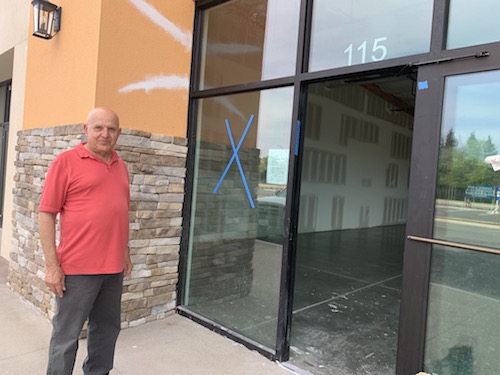 Mosa Gazali of Fresno and his partner are bringing Daphne’s Restaurant — a Greek, California fusion restaurant — and Wayback Burger to El Paseo in Fresno. Photo by Edward Smith

Gazali said he discovered Daphne’s when a friend took him and his business partner to the San Bernardino location.

With different plates, bowls and skewers of grilled meats, veggies and, of course, hummus, Gazali said he loved how fresh the food was. There are pita sandwiches as well as vegan and vegetarian options. He loved it so much he said he put a deposit of 50% on a second location if the first one works out. He mentioned Clovis and Visalia as possible areas for a second location.

Across the way, closer to where Regal Cinemas will open up another movie theater will be Wayback Burger. Founded in 1991 in Delaware, the international franchise operates 145 stores, with the locations in Firebaugh and Tulare.

Gazali hopes to start construction on the 1,700-square-foot burger joint next week as well, but anticipates that Daphne’s will be finished first. Beyond the eponymous burger, Wayback also serves up hotdogs, milkshakes and salads.

Both locations will employ between 16-20 people.

Gazali owns a grocery store and oversees numerous rental properties. He wanted to get into restaurants because he says it will let him work part-time. He said family will come in to help and his son will manage.

Back to news archive page